The Bo tree at the Upper Terrace is considered be a shoot from one of the 32 saplings of Anuradhapura Jaya Sri Maga Bodhi planted at the said terrace during the rein of King Devanam Piyatissa. Mulkirigala temple is also considered to be one of the 64 temples constructed by King Kawantissa and was called as 'Muhudu Gira' then which dates back to the 3rd Century BC . The Chetiya at Uppermost Terrace is considered to house Lord Buddha relics offered by the King Saddhatissa. According to Historical manuscripts, King Mahanaga, King Kawantissa, King Dutugemunu, King Parakramabahu the Great, King Saddhatissa, King Valagamba, King Jetta Tissa I, King Parakramabahu I are credited with construction work of the temple during their rein.

The temples remaining at present belongs to the Kandyan era and the Buddha images and many cave paintings depicts magnificent examples of Kandyan era arts and crafts. Mulkirigala Rock Temple is one of the few 'Raja Maha Vihara' or the 'Temples of the Great Kings' ( of the Kandyan Kingdom) found out of the then Kandyan Kingdom. King Keerthi Sri Rajasinghe (1747 AD) gave his patronage to reconstruct this temple after it being neglected for centuries since the rein of the Parakramabahu the Great.

Along the path to Lower Terrace

The main entrance to the temple premises is at the surrounding ground level. Passing a Pilgrim's rest and the Sanghavasa where the monks reside, the path leads towards the Lower Terrace and the Ticket office. Here one can see the cave of Lord Chulla Tissa, bearing early Brahmi scripts belonging to 2nd Century BC. Turning to left near the cave takes one to the Lower Terrace area.

Click on Thumbnail Photos to see full size image and the photo description.

Passing the Bo Tree and proceeding further, one comes to the First Cave temple. This is called as the Cobra Cave Temple of the Great King. This temple is considered to be built in 1808 AD just as the English concurred the country. There is a large Reclined Buddha statue in this cave temple. There are paintings of God Saman, God Kataragama, God Vishnu, and God Vibhishana on temple walls. The cave's roof area is having paintings of the 24 Buddhas and Floral designs. The second cave called as ' Paduma Rahath ' temple also have a large Reclining Buddha image. There is a small painted Dagoba found inside the cave with Jataka Stories of Thelapatta and Vessantara painted on the inside of the built in front wall. This cave is connected to an Arhat Bikku of an earlier time as the name implies.

Coming back towards the Cave with Inscriptions and Ticket Office, and going straight along the path with sections of steps takes one towards the second terraced temple. This path shows a section of the Rock face quite clearly. Halfway through, opposite the Resting Building, the steep section of steps leads to the terrace area. There is a rock with 6-7 Century AD inscription near this inter section.

This small sized cave consists of a Reclined Buddha statue with Arhat Sariputta and Arhat Moggallana images by the two sides of the Buddha image. Seated and Standing Buddha figures also can be found here. The wall paintings depicting some important incidences of Lord Buddha's life are also of interest. Many paintings have been given titles here and amongst them are the 'Anotatta Vila',' Uturu Kuru Divayina' , and 'Birth of Prince Siddartha' at Lumbini. A place to worship Gods also can be seen at one side of the temple.

Climbing up the stone steps and coming through the Vahalkada, the terrace containing the last four cave temples can be observed. Coming through the Vahalkada and going straight towards the doorway, is to the 'Parana Viharaya' or the Old Temple. This is the oldest of the four temples found here hence called by that name.There is a stone doorway to enter the inner shrine which is dated back to 1849 AD. The stone doorway is carved with a design of floral decorations and squirrels. The Sleeping or the Reclined Buddha image is highly decorative with minute details containing the kandyan era Buddhist sculpturing. There are standing Buddha images numbering eight by the side of the head position with Abaya Mudra. Paintings of 'Sath Sathiya' and 'Solosmasthana' or the sixteen places sanctified by the Lord Buddha can be found in this cave temple. Kandyan era wooden column decorations also can be seen here.

This temple is newer and had been renovated around 1918 .The temple has two doorways and the doorways are decorated with impressive 'Makara Torana' or Dragon Arches. The Gods of the Four Cardinal points as considered by Buddhists, called as 'Satharavaram Devi' are sculptured by the two doorways. They are called as 'Visravana','Virupakse', 'Virudha' and 'Dratharashta'. A Reclined Buddha, Seated Buddha and Standing Buddha statues can be found here. Three past Buddhas , 'Kakusanda', 'Konagama', 'Kashyapa' and Gauthama Buddha images are to be seen there.

Located at the furthest left side of the Terrace is the Cobra Cave Temple. There is a reclined Buddha image, seated Buddha image, standing Buddha image as well as images of the first five disciples or Pas Vaga Bikkus. The earlier villagers were of the belief that there had been a tunnel from this cave that surfaced up in the area of Hakmana , many miles away.

This is the last cave temple found at Mulkirigala and the only Parinirvana Buddha image is found in this temple. This temple is dedicated to the last moments of the Gauthama Buddha with sculptures of grieving bikkus, Kings and Gods. The paintings depicts the events such as Distribution of Buddha relics by Drona brahmin.

To reach the topmost terraces, there is a fascinating path made by cutting steps in to the living rock with a very uncommon design, not found else where in the island. Actually there is a route leading up and a separate one when coming down from the upper terrace. Reaching the Bodhi Maluwa, is the present two Bo Tree saplings originated from the Jaya Sri Maha Bo Tree of Anuradhapura. From the Bodhi Terrace the stairs leads to the final terrace containing the Dagoba or the Chetiya with Buddha Relics. There is a structure used for offering homage to the Buddha near the dagoba. This highest elevated point gives a fine view of the surrounding landscape too.

Coming down to the lower terrace from Bodhi terrace takes you through the second path of stone cut steps , which finally joins the other stone step section. 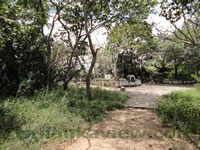 The Ascend to Lower Terrace

Protect Nature and Nature will Protect You